It’s A Wonderful World: A Memoir
by - Khalid A-H Ansari 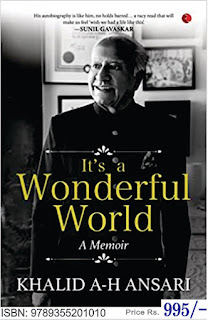 About the Book
In its broad, multifaceted sweep of events from his birth in Mumbai’s poverty-stricken Madanpura to a father who started life as an orphan and a mother from a penurious family, Khalid Ansari’s life has been an enjoyable and purposeful journey in service of his fellow human beings. In this ‘donkey’s tale—upar wala meherbaan to gadha pehelwaan(When God smiles kindly, the donkey thinks he’s a wrestler)’, Ansari has endeavoured to capture some highlights of a splendoured life which he has been blessed to live, catching stars while chasing rainbows.
From starting newspapers and magazines; representing his country at the United Nations; accompanying dignitaries on state visits; covering cricket Test matches, nine Olympics, Commonwealth and Asian Games; travelling the world; being honoured with the Padma Shri award—it’s been indeed la vie en rose.
In this memoir, the author has been at pains to prevent this from deteriorating into a ‘I-did-this-did-that’-pat-himself, shabash!’ hagiography or a dry-asdust pontificaltome, by ‘spicing’ it up with dollops of frothy anecdotes and self-critical bon mots even as he has attempted a discourse on the purpose of life, the ‘right path’ and the like.
Since charity and service to humankind are now the author’s obsession post retirement, he has also dwelt at some length upon his private, selffunded charitable foundation and on giving away whatever little material possessions his wife Zeyna and he have acquired in his lifetime.
About the Author
Khalid A-H Ansari has a bachelor’s degree in Law (L.L.B.), a master’s degree (M.A.) in Political Science from Mumbai University and master’s degree (M.A.) in Journalism and Mass Communication from Stanford University, California, USA. In 2012, he retired as founder-chairman of Mid-Day Multimedia Ltd, which published Asia’s leading afternoon newspaper, in two languages from Mumbai, New Delhi, Bangalore and Pune. Sunday MIDDAY and The Inquilab Urdu Daily was started by his late freedom fighter father Abdul Hamid Ansari in 1937.
After returning to India after his studies in the US, he started the Sportsweek magazine, which went on to become India’s leading sports magazine. At the time of his retirement, Khalid A-H Ansariwas also the chairman of M.C. Media Ltd, whose activities included FM Radio broadcasting (a joint venture with the BBC, London) in eight Indian cities.
Some highlights of his career include being conferred with Padma Shri for ‘distinguished services to literature and journalism’ by President K.R. Narayanan in 2001, being a member of the official Indian delegation to the United Nations General Assembly in New York and Geneva in 1989, covering the Kargil war in 1999, the Fiji coup in 2000, the NAM conference in Harare and CHOGM summit in the Bahamas, in 1985, covering various foreign visits of presidents A.P.J. Abdul Kalam, Giani Zail Singh and Fakhruddin Ali Ahmed and prime ministers Rajiv Gandhi and Atal Bihari Vajpayee and covering the Olympic Games in Munich ’72, Montreal ’76, Moscow ’80, Los Angeles ’84, Seoul ’88, Atlanta ’96, Sydney 2000, Athens ’04 and Beijing ’08.
Khalid is the author of Sachin: Born to Bat, Reliance World Cup, Champions of One Day Cricket and Cricket at Fever Pitch.
************************************************************************** 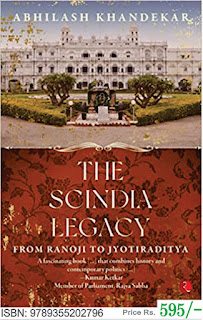 About The Book
From Royalty To Politics, A Hard-hitting Look At The History Of One Of The Greatest Dynasties Of India, Mired In Wars, Public Disputes And Property Contentions.
The Scindia Dynasty, A 300-year-old Royal House, Is Perhaps The Only Family In India Which Is Known Not Just For Its Unlimited Riches And Never-ending Popularity But Also For Its Immense Social Service, Mainly Through Politics. There Are Innumerable Stories—some Told Repeatedly And Others Seldom Told—from The Time Ranoji Scindia Founded The Dynasty In 1731 To Rajmata Vijaya Raje Scindia’s Unwilling Entry In Politics In 1957 To Jyotiraditya Scindia’s Entry In The Rajya Sabha In 2020.
The Book Deftly Outlines How, Of The Three Generations In Politics Over The Centuries, It Was Only Madhavrao—rajmata’s Son And Jyotiraditya’s Father—who Had Never Lost An Election. He Was The Darling Of People From His Erstwhile Royal House Of Gwalior, Until His Untimely Demise In An Air Crash. Rajmata And Her Grandson Jyotiraditya Were Members Of Both Houses Of Indian Parliament At Different Times. The Two Share Several Similarities: Both Were In The Congress First And Then Left It Dramatically, To Say The Least. Both, Angered By Prevailing Political Situations Within Their Party, Brought Down Their Own Governments—some 40 Years Apart!
This Book Unveils Many Stories, About How The Scindias Have Conducted Themselves In Public With A Degree Of Elan, Despite The Bitter Legal And Political Fights Which Were The Bane Of The Scindias.
The Scindia Legacy Showcases The Courage And Charisma Of One Of The Eminent Political Families Of India.
About The Author
Hailing From Madhya Pradesh, Abhilash Khandekar Is A Veteran, Award-winning Journalist Of The Standing Of Close To 40 Years In English, Hindi And Marathi Languages. Having Worked In His Home State As Well As In Madhya Pradesh, Maharashtra And Delhi In Publications Such As Free Press Journal, Hindustan Times, Dna, Dainik Bhaskar And Divya Marathi, He Knows The Nitty-gritty Of Indian Politics Rather Well. He Worked For Several Years As The National Political Editor Of The Dainik Bhaskar Group In New Delhi Before Moving To Tv.
Khandekar Is Presently The Roving Editor Of The Lokmat Group Of Newspapers.
Khandekar Was Unanimously Elected The President Of The Madhya Pradesh Cricket Association (mpca) In 2019 And Is The Moving Force Behind The Bhopal Literature And Art Festival As One Of Its Founding Members.
Khandekar Also Dabbles In The Field Of Environment, Writing Extensively On Critical Issues Such As Tiger Conservation And Biodiversity.
********************************************************************************** 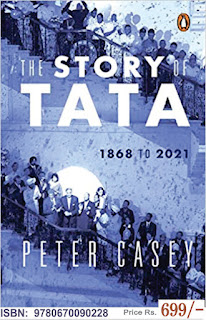 About the Book
The first and only authorized biography on Tata Group including the Tata-Mistry legal battle, exclusive interviews with Ratan Tata, and never-before-seen photographs of the Tata family.
In 1868, Jamsetji Tata, a visionary of his time, lit the flame that went on to become Tata and its group of companies. This business grew into an extraordinary one. One that some may even call 'the greatest company in the world'. Over the decades, the business expanded and prospered under the leadership of the various keepers of the flame, such as Sir Dorabji Tata, J.R.D. Tata and Ratan Tata, to name a few. But one day, the headlines boldly declared that the chairman of the board of Tata Sons, Cyrus Mistry, had been fired.
What went wrong?
In this exclusive and authorized book, insiders of the Tata businesses open up to Peter Casey for the first time to tell the story. From its humble beginnings as a mercantile company to its growth as a successful yet philanthropic organization to its recent brush with Mistry, this is a book that every business- minded individual must read.
About the Author
Peter Casey is the founder and executive chairman of Claddagh Resources, a global recruitment and search business that places high-level executives with many of the world's Fortune 500 companies. Having established successful business interests in Australia and Ireland, Peter set up Claddagh Resources in Atlanta, Georgia, in 1995. Claddagh currently operates across four continents.
Peter was named by Irish America magazine as one of the leading Irish-American businessmen of 2007. He has had a wide portfolio of business interests, including commercial, residential and agricultural property in Ireland. Peter is also an accomplished writer and a political and business commentator, with articles published regularly in Ireland and the United States. Peter was a panellist for several years on the Irish television programme Dragons' Den. In 2018, Peter stood as an independent candidate for the Presidency of Ireland. He was runner up securing 23.4% of the vote.
Peter lives in Atlanta with his wife, Helen, and their five children, and divides his time between the States and his family home in Derry, Northern Ireland. Outside work Peter is a passionate golfer and swimmer.
-----------------------------------------------------------------------------