About The Book :
A rich and hallucinatory novel, set around a Bombay opium den, that follows a fascinating cast of flawed characters as the city transforms itself over three decades.

Wait now, light me up so we do this right, yes, hold me steady to the lamp, hold it, hold, good, a slow pull to start with, to draw the smoke low into the lungs, yes, oh my...

Shuklaji Street, in Old Bombay. In Rashid's opium room the air is thick with voices and ghosts: Hindu, Muslim, Christian. A young woman holds a long-stemmed pipe over a flame, her hair falling across her eyes. Men sprawl and mutter in the gloom. Here, they say you introduce only your worst enemy to opium. There is an underworld whisper of a new terror: the Pathar Maar, the stone killer, whose victims are the nameless, invisible poor. In the broken city, there are too many to count. Stretching across three decades, with an interlude in Mao's China, it portrays a city in collision with itself. With a cast of pimps, pushers, poets, gangsters and eunuchs, it is a journey into a sprawling underworld written in electric and utterly original prose.

About The Author :
Jeet Thayil was born in Kerala, India in 1959 and educated in Hong Kong, New York and Mumbai. He is a performance poet, songwriter and guitarist as well as a writer, and has published four collections of poetry. He is the editor of The Bloodaxe Book of Contemporary Indian Poets (2008). He currently lives in Bangalore.

A Memsahib Cooks
By - Kikky Sihota

About the Book :
The Ultimate Army Cookbook: A Memsahib Cooks is a salute to thearmy by Kikky Sihota. Born into an army family, Kikky has been accustomed to playing host to a crowd that takes good company and delicious food for granted.
With an inventory consisting of wonderful experiences filled with laughter, sorrow and bonding that depict life in the armed forces, this book has all the necessary ingredients for a victory.Divided into battalions that cover everything from Choti Hazari and Badi Hazari to elegant high teas, from Paagal Gymkhanas to picnics and shikars, the recipes here are a result of years of practice drills where she would have to keep her kitchen well stocked to feed the many young officers, hold cooking classes for young army wives. Firepower comes in the form of over 100 delightful recipes such as Major Greys Chicken, Madras Lancers Fish, Babinas Cheesecake and much more.
For any food lover, this book is a welcome invasion into their kitchen.

A MEMORY OF LIGHT
BY - ROBERT JORDAN

ABOUT THE BOOK
For twenty years, The Wheel of Time has enthralled more than forty million readers in over thirty-two languages. A Memory of Light brings this majestic fantasy creation to its richly satisfying conclusion.
'And it came to pass in those days, as it had come before and would come again, that the Dark lay heavy on the land and weighed down the hearts of men, and the green things failed, and hope died.' - From Charal Drianaan te Calamon, The Cycle of the Dragon.
In the Field of Merrilor the rulers of the nations gather to join behind Rand al'Thor, or to stop him from his plan to break the seals on the Dark One's prison - which may be a sign of his madness, or the last hope of humankind. Egwene, the Amyrlin Seat, leans toward the former.
In Andor, the Trollocs seize Caemlyn.
In the wolf dream, Perrin Aybara battles Slayer.
Approaching Ebou Dar, Mat Cauthon plans to visit his wife Tuon, now Fortuona, Empress of the Seanchan.
All humanity is in peril - and the outcome will be decided in Shayol Ghul itself. The Wheel is turning, and the Age is coming to its end. The Last Battle will determine the fate of the world. . .
Working from notes and partials left by Robert Jordan when he died in 2007, and consulting with Jordan's widow, who edited all of Jordan's books, established fantasy writer Brandon Sanderson has recreated the vision Jordan left behind.

Seven Days Without You 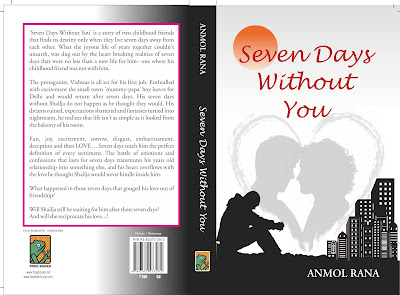