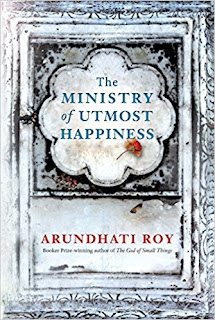 The Ministry of Utmost Happiness
By - Arundhati Roy

----------------------------- About the Book -----------------------------
The Ministry of Utmost Happiness takes us on a journey of many years – the story spooling outwards from the cramped neighbourhoods of Old Delhi into the burgeoning new metropolis and beyond, to the Valley of Kashmir and the forests of Central India, where war is peace and peace is war, and where, from time to time, ‘normalcy’ is declared.
Anjum, who used to be Aftab, unrolls a threadbare carpet in a city graveyard that she calls home. A baby appears quite suddenly on a pavement, a little after midnight, in a crib of litter. The enigmatic S. Tilottama is as much of a presence as she is an absence in the lives of the three men who love her.
The Ministry of Utmost Happiness is at once an aching love story and a decisive remonstration. It is told in a whisper, in a shout, through tears and sometimes with a laugh. Its heroes are people who have been broken by the world they live in and then rescued, mended by love – and by hope. For this reason, they are as steely as they are fragile, and they never surrender. This ravishing, magnificent book reinvents what a novel can do and can be. And it demonstrates on every page the miracle of Arundhati Roy’s storytelling gifts.
---------------------------- About the Author ----------------------------
Arundhati Roy is the author of The God of Small Things, which won the Booker Prize in 1997 and was a bestseller in more than thirty languages worldwide.
Since then Roy has published five books of influential non-fiction essays that include The Algebra of Infinite Justice (2001), Listening to Grasshoppers (2009), and Broken Republic (2011). She has raised profound questions about war and peace, the definitions of “violence” and “non-violence”, about what we think of as “development”, “democracy”, “nationalism”, “patriotism” and indeed the idea of civilization itself.
ISBN :  978067008963
Price : Rs.599.00