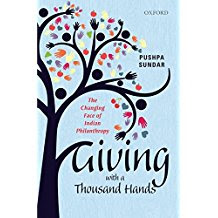 Giving with a Thousand Hands
By - Pushpa Sundar