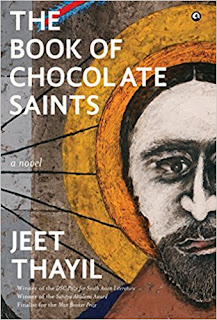 The Book of Chocolate Saints
by - Jeet Thayil


About the Book
In incandescent prose, award-winning novelist Jeet Thayil tells the story of Newton Francis Xavier, blocked poet, serial seducer of young women, reformed alcoholic (but only just), philosopher, recluse, all-round wild man and India’s greatest living painter. At the age of sixty-six, Xavier, who has been living in New York, is getting ready to return to the land of his birth to stage one final show of his work (accompanied by a mad bacchanal). As we accompany Xavier and his partner and muse ‘Goody’ on their unsteady and frequently sidetracked journey from New York to New Delhi, the venue of the final show, we meet a host of memorable characters—the Bombay poets of the seventies and eighties, ‘poets who sprouted from the soil like weeds or mushrooms or carnivorous new flowers, who arrived like meteors, burned bright for a season or two and vanished without a trace’, journalists, conmen, murderers, alcoholics, addicts, artists, whores, society ladies, thugs—and are also given unforgettable (and sometimes unbearable) insights into love, madness, poetry, sex, painting, saints, death, God and the savagery that fuels all great art.
Narrated in a huge variety of voices and styles, all of which blend seamlessly into a novel of remarkable accomplishment, The Book of Chocolate Saints is the sort of literary masterpiece that only comes along once in a very long time.
About the Author
Jeet Thayil was born in Mamalasserie, Kerala, in 1959 and educated in Jesuit schools in Bombay, Hong Kong and New York. He worked as a journalist for twenty-three years before writing his first novel. His five poetry collections include Collected Poems, English and These Errors Are Correct, which won the 2013 Sahitya Akademi Award. He is the editor of The Bloodaxe Book of Contemporary Indian Poets. Jeet Thayil’s novel Narcopolis won the 2012 DSC Prize for South Asian Literature and was shortlisted for five other prizes, including the Man Booker Prize, the Man Asian Literature Prize and the Commonwealth Prize.
ISBN : 9789386021038
Price : Rs.799.00