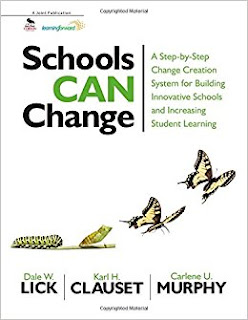 Schools Can Change:
A Step-by-step Change Creation System for Building Innovative Schools and Increasing Student Learning
By- Dale W. Lick, Karl H. Clauset, Carlene U. Murphy
Corwin, 2013 | Pages - 225
Free online resources with the book.
For distribution in India only
EBD India Special Price
Rs. 1995.00
Amazon Kindle Edition Rs. 2535.45
Amazon Paperback Rs. 3875.45
Order by email sales@ebd.in
Call Manish Chhetri on +91 135 2655192
for assistance
About the Book
Genuine effective school improvement requires leaders and teachers to be part of a broad-based, creative change system that focuses on generating improved teacher practices for enhancing student learning. This guide provides a step-by-step, systemic approach to the change creation process.
How can we really create lasting change? By applying the Change Creation system! Learning community pioneers Dale Lick, Karl Clauset, and Carlene Murphy lead teachers, principals, and schools in this dynamic approach to school improvement. With a free, comprehensive online collection of practical resources, this book shows you how to: Develop the right vision, relationships, and culture to create and sustain change Model learning-inquiry cycles for action teams for success Build loyalty, trust, and responsibility within your teams and across the school.
About the Author
Dale W. Lick is President and Professor Emeritus at Florida State University, a former President of Georgia Southern University, University of Maine, and Florida State University, and, most recently, a University Professor at Florida State University, where he did research in the Learning Systems Institute and taught and directed doctoral students in the Department of Educational Leadership and Policy Studies, and worked on educational and organizational projects involving transformational leadership, change creation, learning organizations, distance learning, school improvement, enhanced student performance, educational technology, new learning systems, strategic planning, and visioning.
Included in over 50 national and international biographical listings, Dr. Lick is the author or co-author of eight books and more than 100 professional articles, chapters and proceedings, and 285 original newspaper columns. His recent books are: Whole-Faculty Study Groups: A Powerful Way to Change Schools and Enhance Learning, 1998; Whole-Faculty Study Groups: Creating Student-Based Professional Development, 2001; Whole-Faculty Study Groups: Creating Professional Learning Communities That Target Student Learning, 2005; and The Whole-Faculty Study Groups Fieldbook: Lessens Learned and Best Practices From Classrooms, Districts, and Schools, 2007, all with Carlene U. Murphy, Corwin Press; Schoolwide Action Research for Professional Learning Communities: Improving Student Learning Through The Whole-Faculty Study Groups Approach, 2008, and Schools Can Change: A Step-By-Step Change Creation System for Building Innovative Schools and Increasing Student Learning, 2012, with Karl H. Clauset and Carlene U. Murphy, Corwin Press; and New Directions in Mentoring: Creating a Culture of Synergy, 1999, with Carol A. Mullen, Falmer Press (London), 1999.
Dr. Lick received B.S and M.S. degrees from Michigan State University, and a Ph.D. degree from the University of California, Riverside, all in Mathematics, and has three levels of certification in Leading and Managing Change from Conner Partners, Atlanta, GA. His alma maters have honored him with the Michigan State University 2006 Distinguished Alumni Award, and, on its 40th Anniversary in 1994, the University of California, Riverside, with the designation as One of 40 Alumni Who Make a Difference.
--------------------------------------------------------------------------------------------- 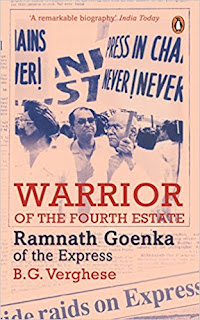 Warrior of the Fourth Estate
Ramnath Goenka of the Express
by -  B.G. Verghese

About the Book
Ramnath Goenka, or RNG as he was popularly known, redefined what it meant to be a newspaper baron. A man of many parts-freedom fighter, Gandhian worker, politician, merchant, industrialist-he made it his mission as a publisher to empower the citizen and hold the ruling classes accountable, often at enormous cost to himself. Goenka was a fearless agent for the freedom of the press, and famously waged an epic battle of defiance against the government during the Emergency.
B.G. Verghese's biography charts the tumultuous course of Goenka's life, from his modest beginnings to his building of the vast Indian Express empire with its multiple editions. It also paints a compelling portrait of a man who was a bundle of contradictions, who had staunch admirers as well as bitter enemies, a man you could love or hate but never ignore. This book is a roller-coaster ride through the twists and turns of Ramnath Goenka's fortunes, including scandals and scoops, fiery public campaigns, dramatic court battles and the making and unmaking of political leaders and governments. Along the way, it tells the story, too, of a newspaper.
About the Author
B.G. Verghese (1927-2014) studied at Delhi and Cambridge universities and was a columnist and author. He served with the Times of India for many years before becoming the information adviser to Prime Minister Indira Gandhi. He was later the editor of the Hindustan Times (1969-75) and the Indian Express (1982-86) and was with the Centre for Policy Research, Delhi, thereafter. His books include Waters of Hope, India's Northeast Resurgent, Reorienting India: The New Geo-Politics of Asia, First Draft: Witness to the Making of Modern India, A State in Denial: Pakistan's Misguided and Dangerous Crusade, Post Haste: Quintessential India and Breaking the Big Story (edited).
Verghese was active in the fields of education, population, human rights, the environment, regional cooperation and security. He was a member of the Press Council and chair of the Media Foundation. He received the Magsaysay Award for Journalism in 1975.
ISBN : 9780143429159  Price : Rs. 499.00