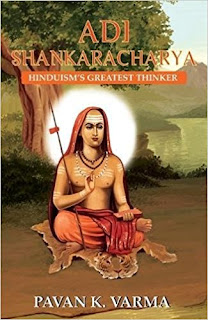 By - Pavan K Varma
About the Book------------------------------------------------------------
What is Brahman? What is its relationship to Atman? What is an individual’s place in the cosmos? Is a personalised god and ritualistic worship the only path to attain moksha? Does caste matter when a human is engaging with the metaphysical world? The answers to these perennial questions sparkle with clarity in this seminal account of a man and a saint, who revived Hinduism and gave to Upanishadic insights a rigorously structured and sublimely appealing philosophy.
Jagad Guru Adi Shankaracharya (788–820 CE) was born in Kerala and died in Kedarnath, traversing the length of India in his search for the ultimate truth. In a short life of thirty-two years, Shankaracharya not only revived Hinduism, but also created the organisational structure for its perpetuation through the mathas he established in Sringeri, Dwaraka, Puri and Joshimatha.
Adi Shankaracharaya: Hinduism’s Greatest Thinker is a meticulously researched and comprehensive account of his life and philosophy. Highly readable, and including a select anthology of Shankaracharya’s seminal writing, the book also examines the startling endorsement that contemporary science is giving to his ideas today. A must read for people across the ideological spectrum, this book reminds readers about the remarkable philosophical underpinning of Hinduism, making it one of the most vibrant religions in the world.
About the Author ---------------------------------------------------------
Pavan K. Varma is a writer-diplomat and now in politics, where he was till recently an MP in the Rajya Sabha, and earlier Advisor to the Chief Minister of Bihar. Author of over a dozen bestselling books including, Ghalib: The Man, The Times; The Great Indian Middle Class; The Book of Krishna; Being Indian; Becoming Indian; and Chanakya’s New Manifesto, he has been Ambassador in several countries, Director of The Nehru Centre in London, Official Spokesperson of the Ministry of External Affairs, and Press Secretary to the President of India.
Pavan K. Varma was conferred an Honorary Doctoral Degree for his contribution to the fields of diplomacy, literature, culture and aesthetics by the University of Indianapolis in 2005.
ISBN : 9788193655610
Price : Rs. 699.00