Democracy on the Road
By - Ruchir Sharma 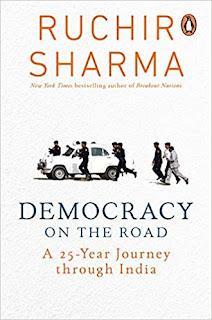 About the Book
On the eve of a landmark general election, Ruchir Sharma offers an unrivalled portrait of how India and its democracy work, drawn from his two decades on the road chasing election campaigns across every major state, travelling the equivalent of a lap around the earth. Democracy on the Road takes readers on a rollicking ride with Ruchir and his merry band of fellow writers as they talk to farmers, shopkeepers and CEOs from Rajasthan to Tamil Nadu, and interview leaders from Narendra Modi to Rahul Gandhi.
No book has traced the arc of modern India by taking readers so close to the action. Offering an intimate view inside the lives and minds of India's political giants and its people, Sharma explains how the complex forces of family, caste and community, economics and development, money and corruption, Bollywood and Godmen, have conspired to elect and topple Indian leaders since Indira Gandhi. The ultimately encouraging message of Ruchir's travels is that, while democracy is retreating in many parts of the world, it is thriving in India.

About the Author
For many years Ruchir Sharma's writing has drawn on his travels as a global investor, which take him to a different emerging nation every month. Now a contributing writer at the New York Times, his columns
and essays have appeared in Foreign Affairs, the Wall Street Journal, the Financial Times, The Times of India, and many other publications, both global and Indian. His earlier books, The Rise and Fall of Nations
(2016) and Breakout Nations (2012), both became international bestsellers. In Democracy on the Road, Ruchir brings readers along on his travels through India, where he follows at least one big election every year.
ISBN :9780670092208  Price : Rs.699.00