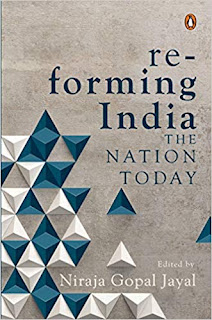 About the Book :
India's social and political landscape has, in recent times, witnessed many significant transformations. This book offers a wide-ranging review of how India has, over the last few years, fared on the most critical dimensions of our collective life-politics, economy, governance, development, culture and society. The project of change entailed processes of both reform and re-formation: if reform was about correcting or improving what was considered unsatisfactory, re-formation was a bolder project that aimed to construct anew, anchored in a fundamental re-visioning of India in social, cultural and even moral terms. In many ways, the programme of re-forming India may have outpaced that of reforming India and even exceeded its own expectations. This volume provides an overview of the prevailing political imaginary of nationalism and of the current trends of public discourse in Indian democracy; it seeks to identify and interpret the transformations in state institutions and the public sphere and evaluate their implications for the future. Re-Forming India brings together reflections, from leading commentators in their fields, on some of these transformations-from the promise of economic revival and demonetization to the impact on gender relations, higher education and the media. Has the country been transformed in ways that were promised? Or indeed in other ways that had not been anticipated?
About the Author
NIRAJA GOPAL JAYAL is professor at the Centre for the Study of Law and Governance at the Jawaharlal Nehru University, New Delhi. Her book, Citizenship and Its Discontents (Harvard University Press, 2013), won the Ananda Kentish Coomaraswamy Prize of the Association of Asian Studies in 2015. She is also the author of Representing India: Ethnic Diversity and the Governance of Public Institutions (Palgrave Macmillan, 2006) and Democracy and the State: Welfare, Secularism and Development in Contemporary India (OUP, 1999). She has co-edited The Oxford Companion to Politics in India, and is the editor/co-editor of, among others, Democracy in India (OUP, 2001) and Local Governance in India: Decentralisation and Beyond (OUP 2005).
She is currently working on a book on the decline of the public university in India. She has held visiting appointments at, among others, King's College, London; the EHESS, Paris; Princeton University; and the University of Melbourne. In 2009, she delivered the Radhakrishnan Memorial Lecture at All Souls College, Oxford.