My Seditious Heart
By - Arundhati Roy 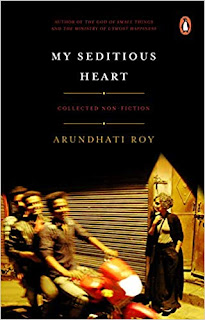 Bottle of Lies By - Katherine Eban
`
About the Book
In 2004, Dinesh Thakur, a senior employee of Ranbaxy, then India’s largest pharma company, discovered a terrible secret.Ranbaxy had been fabricating the test results of their drugs,endangering millions of patients. Thakur resigned and became a whistleblower to the US Food and Drug Administration, one of the regulators Ranbaxy had been lying to, and ultimately brought the multibillion-dollar behemoth to its knees. This is the sensational account of the high-stakes chase to bring Ranbaxy to book and the fall from grace of one of corporate India’s biggest success stories. But the rot in Indian pharma isn’t confined to Ranbaxy alone. In this book, investigative journalist Katherine Eban relies on over 20,000 FDA documents and interviews with over 240 people to show how fraud and trickery are deeply entrenched in much of the industry in India, and raises troubling questions about some of its biggest names – Wockhardt, Dr Reddy’s, Glenmark and RPG Life Sciences. Filled with shocking and eye-opening details, this book lays bare the ugly truth of Indian pharma. It will make you view every pill you take with foreboding and suspicion.
About the Author
Katherine Eban, an investigative journalist, is a Fortune magazine contributor and Andrew Carnegie fellow. She has also written for Vanity Fair, the New York Times, Self, The Nation, the New York Observer, and other publications. She is the author of Dangerous Doses: A True Story of Cops, Counterfeiters, and the Contamination of America’s Drug Supply, and lectures frequently on the topic of pharmaceutical integrity. Educated at Brown University and Oxford, where she was a Rhodes scholar, she lives in New York City with her husband and two daughters.
---------------------------------------------------------------------------------------------


In Chanakya’s View: Understanding India in Transition, Pavan K. Varma, best-selling author of Adi Shankaracharya: Hinduism’s Greatest Thinker, analyses the challenges that India faces today. In a minute and frank critique, he points to behavioural change as the need of the hour: Indians need to respect institutions, shun intolerance, accommodate dissent, follow strategic diplomacy and increase their moral quotient. At once a celebration of India and an appraisal of it, Chanakya’s View is a roadmap to making the republic a truly great one.
One of India’s foremost public intellectuals, and also a politician, Varma firmly believes that India will sustain owing to its great civilisational heritage and the strength of its people. As a committed admirer of the great strategist Chanakaya, he is convinced that these years of transition will ultimately lead to a maturation worthy of the world’s largest democracy.
About the Author
Author of the bestselling book, Adi Shankaracharya: Hinduism’s Greatest thinker, Pavan K. Varma is a writer-diplomat and now in politics, where he was till recently an MP in the Rajya Sabha. He was earlier Advisor to the Chief Minister of Bihar, with rank of Cabinet minister. He was Ambassador in several countries, also Director of The Nehru Centre in London, Official Spokesperson of the MEA, and Press Secretary to the President of India. Author of over a successful dozen books, Pavan K. Varma is currently the National General Secretary and National Spokesman of the Janata Dal (United).
He was conferred an Honorary Doctoral Degree for his contribution to the fields of diplomacy, literature, culture and aesthetics by the University of Indianapolis in 2005. He was also awarded the Druk Thuksey Award, Bhutan’s highest civilian award, by His Majesty the King of Bhutan. In 2018, on the instructions of His Holiness the Shankaracharya of Sringeri , Pavan K. Varma was conferred an honorary doctorate by the Sri Sharada Institute of Indian Management.
---------------------------------------------------------------------------------

Sita Under The Crescent Moon
By - Annie Ali Khan 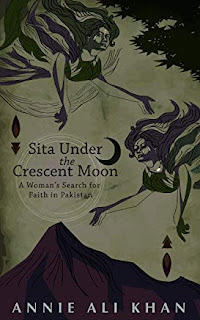 In present-day Pakistan, in the far corners of lyari in Karachi, or hingol in Balochistan, or thatta in Sindh, tightly knit groups of women keep alive the folklore, songs and legends of sati—their name for Sita in the Ramayana. In Sita under the Crescent moon, Annie Ali Khan travels with women devotees, those without resources, on pilgrimages to retrace the way they worship the goddess. Who are these pilgrims? How did this relationship with Sati start, and why is she so significant? Even while narrating the stories and experiences of these pilgrims, Sita under the Crescent moon shows how worship has changed mind-sets and altered many of the mores of the land. The sacral sites, made up of clay and thread, grant a woman power and autonomy to fight her circumstances and transcend her worldly lot if not all the time, at least in prolonged moments of worship that take her to a different, uplifted spiritual Zone and a new understanding of the world.