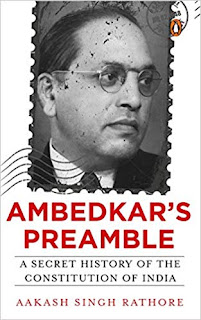 
A Secret History of the Constitution of India

About the Book
On 26 January 1950, the Constitution of India was adopted formally and came into effect. Its preamble set out in brief the enlightened values it enshrined and hoped to engender. In a radical shift from mainstream constitutional history, this book establishes Dr B.R. Ambedkar's irrefutable authorship of the preamble by uncovering the intellectual origins of its six most central concepts-justice, liberty, equality, fraternity, dignity, and nation.
Although Dr Ambedkar is universally regarded as the chief architect of the Constitution, the specifics of his role as chairman of the Drafting Committee are not widely discussed. Totally neglected is his almost single-handed authorship of the Constitution's Preamble, which is frequently and mistakenly attributed to B.N. Rau rather than to Ambedkar.
This book establishes how and why the Preamble to the Constitution of India is essentially an Ambedkarite preamble. It is clear that its central concepts have their provenance in Ambedkar's writings and speeches. Through six eponymous chapters, this book unfolds the story of the six constitutional concepts. In doing so, it spotlights fundamental facts about modern Indian history, as well as Ambedkar's revolutionary political thought, hitherto ignored in conventional accounts.
About the Author
Aakash Singh Rathore is a philosopher of international repute, the author of seven books (including A Philosophy of Autobiography: Body & Text), and a regular contributor to the Indian Express and Outlook magazine with bylines in the Times of India, Firstpost and Huffington Post. He is also India's No. 3 Ironman triathlete and a social media influencer. Rathore has taught at Jawaharlal Nehru University and University of Delhi, as well as at Rutgers University, University of Pennsylvania, University of Toronto, Humboldt University of Berlin and LUISS University, Rome. He is International Fellow of the Centre for Ethics and Global Politics, Rome, and Fellow at the Indian Institute of Advanced Study, Shimla. Rathore is also the series editor of Rethinking India (fourteen volumes, forthcoming 2019-20) and co-editor of its first volume, Vision for a Nation: Paths and Perspectives (with Ashis Nandy). He is also series editor of Ethics, Human Rights and Global Political Thought (Routledge) and Religion and Democracy: Reconceptualizing Religion, Culture, and Politics in Global Context (Oxford). His eighteen books, some of which he has edited, have been published by leading international publishers and range from political philosophy, law and religion to literature, sports and wine.
------------------------------------------------------------------------------------------------------------