The Code Breaker
By - Walter Isaacson
About the Book 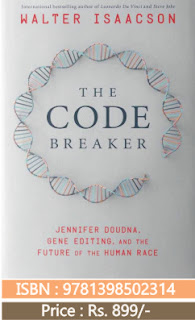 In 2012, Nobel Prize winning scientist Jennifer Doudna hit upon an invention that will transform the future of the human race: an easy-to-use tool that can edit DNA.
Known as CRISPR, it opened a brave new world of medical miracles and moral questions. It has already been deployed to cure deadly diseases, fight the coronavirus pandemic of 2020, and make inheritable changes in the genes of babies.
But what does that mean for humanity? Should we be hacking our own DNA to make us less susceptible to disease? Should we democratise the technology that would allow parents to enhance their kids?
After discovering this CRISPR, Doudna is now wrestling these even bigger issues.
THE CODE BREAKERS is an examination of how life as we know it is about to change – and a brilliant portrayal of the woman leading the way.
About the Author
Walter Isaacson, a professor of history at Tulane, has been CEO of the Aspen Institute, chair of CNN, and editor of Time. He is the author of Leonardo da Vinci; The Innovators; Steve Jobs; Einstein: His Life and Universe; Benjamin Franklin: An American Life; and Kissinger: A Biography, and the coauthor of The Wise Men: Six Friends and the World They Made..
++++++++++++++++++++++++++++++++++++++++++++++++++++++++++++++++++++++++