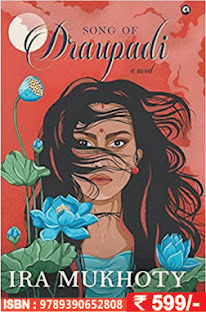 Song of Draupadi
By Ira Mukhoty
About the Book
The Mahabharat is renowned for its great battles, heroic men, and gods walking the pathways of mortals. However, the beating heart of the epic is often forgotten—the stories of its women. Many of these exceptional women appear in Song of Draupadi—the indomitable Satyavati, the otherworldly Ganga, the indestructible Kunti, and the tenacious Gandhari—but the passionate and fiery Draupadi rises above them all to grip the imagination of the reader.
Born of a dangerous sacrifice, Draupadi and her brother Drishtadumna are called forth to avenge Drona’s insult to their father. While Drishtadumna is expected to kill Drona on the battlefield, Draupadi’s role is not set out, but she dreams of fire and blood. From beloved daughter and princess of Panchala to wife of the brave Pandavas and queen of Indraprastha, Draupadi finds herself exiled to the forest, humiliated and determined on vengeance. The novel is a symphony, in several keys, of her voice and those of the other women around her—arguing, pleading, reasoning, and often raised in righteous anger.
About the Author
Ira Mukhoty is the author of Akbar: The Great Mughal, Daughters of the Sun: Empresses, Queens and Begums of the Mughal Empire and Heroines: Powerful Indian Women in Myth and History. Living in one of the oldest continuously inhabited cities in the world, she developed an interest in the evolution of mythology and history, the erasure of women from these histories, and the continuing relevance this has on the status of women in India. She writes rigorously researched narrative histories that are accessible to the lay reader. She lives in Gurgaon with her husband and two daughters. Song of Draupadi is her first novel.
****************************************************************