The Silent Coup: A History of India's Deep State
by - Josy Joseph 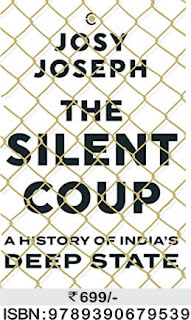 About the Book
‘They were not expected to behave like the terrorists they were hunting. Even in the thickest fog of war, the law-abider and the law-breaker must be distinguished.’
India is justly proud of a parliamentary democracy that has never been threatened by a military coup. No mean feat in a neighbourhood where coups are common and notions of constitutionality shaky. However, for decades now, India’s democratic standing has been steadily declining. An international analysis recently rated the country as only ‘partly free’, while another deemed it an ‘electoral autocracy’.
Josy Joseph investigates this decline and comes away with a key insight: that the process of confronting militancy has warped the system. As insurgencies erupted across India, and grew increasingly more sophisticated in the 1980s and ’90s, the security establishment struggled to keep up. Increasingly overwhelmed, the police forces, intelligence agencies, federal investigation agencies, tax departments and the like came up with ingenious—at times sinister—solutions: from faking and framing evidence to staging massive terror attacks and even creating terrorist organisations. Over time, militancy became a flourishing, multi-faceted business enterprise.
From the Kashmiri militancy to the Sri Lankan civil war, from the attack on Mumbai to the long-term unrest in the Northeast, India’s ‘war on terror’ has made its security institutions more nationalistic and chauvinistic and, inevitably, more corrupt. Most dangerously, there is a near-complete capture of the security apparatus, whether investigative agencies, police or intelligence, by the political executive—serving as stormtroopers with no accountability, rather than as defenders of the Constitution.
The result of more than two decades of reporting on insurgencies, terrorism and the security establishment, The Silent Coup is a wake-up call to the nation. You do not need a military coup to subvert democracy, Joseph says—in India, it has already been subverted.
About the Author
Josy Joseph is a writer-journalist based in New Delhi, and founder of Confluence Media, a platform-agnostic investigative journalism outfit. His first book, A Feast of Vultures: The Hidden Business of Democracy in India, won the 2017 Crossword Award for the best non-fiction book.
He has won several awards for his journalism, including the Prem Bhatia Trust’s ‘India’s best political reporter’ in 2010 and the ‘Journalist of the Year’ Ramnath Goenka award in 2013. The Prem Bhatia trust citation said the award was ‘for his scoops and revelations, which include a list of scams that have become familiar names in the political lexicon’. Josy has exposed some of India’s biggest scandals—among them, the Mumbai Adarsh Housing scam and the 2010 Commonwealth Games scams—and his stories have played a significant role in impacting the country’s social and political narrative.
He was the National Security Editor of The Hindu newspaper until August 2018, when he left to start Confluence Media. Previously, he has also worked with The Times of India as its Editor, Special Projects, Daily News and Analysis (DNA) as an Associate Editor, and several other mainstream publications.
At Confluence Media, Josy is experimenting with creating a commercially viable, scalable, quality journalism outfit.
**************************************************************************