India vs UK: The Story of an Unprecedented Diplomatic Win
by - Syed Akbaruddin 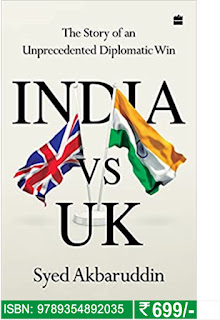 About the Book
From the revolt of 1857 and the freedom movement to duels on the cricket pitch, India and the United Kingdom have been on opposing sides on numerous occasions. A less known instance when this dynamic played out was the 2017 election for a seat on the International Court of Justice.
Unwilling at first, India was prompted to enter the ring in the wake of the Kulbhushan Jadhav case. The contest that followed proved to be a 'second war of Independence' in the words of then foreign minister Sushma Swaraj - and a David-and-Goliath fight against the permanent members of the Security Council, who all put their might behind the UK.
Syed Akbaruddin, India's Permanent Representative to the UN at the time, presents a behind-the-scenes account of India's coming-of-age in world affairs through the prism of this momentous election.
About the Author
Syed Akbaruddin has been amongst the most visible faces of Indian diplomacy in recent times. In a diplomatic career spanning thirty-five years, he spent more than a decade engaged in multilateral diplomacy―both as an Indian diplomat and an international civil servant. He served as India’s Permanent Representative to the UN from 2016 till his retirement from the Indian Foreign Service in 2020. Now the Dean of the Kautilya School of Public Policy, he lives in Hyderabad with his wife, Padma Akbaruddin.
*********************************************************************