The Custodian of Trust: A Banker's Memoir
by - Rajnish Kumar 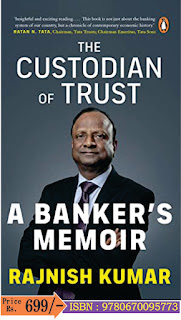 About the Book
He was silently managing the crisis in India's banking sector then.
Now he shares these stories in his memoir.
It began from a modest house in one of the narrowest lanes of the old city of Meerut. From being a probationary officer in the State Bank of India (SBI) in 1980 to its Chairman in 2017, Rajnish Kumar had an amazingly interesting journey in which he saw the many changes in India's banking sector that greatly impacted the country and its economy.
As the Chairman of SBI, Kumar recounts, his term was rather momentous as the period-from 2017 to 2020-during which he shouldered this responsibility was rather unique under any circumstances. The Indian banking sector was going through one of its most tumultuous phases. The problem of non-performing loans (NPLs) had severely impacted the balance sheet and profitability of banks, especially those in the public sector.
In the aftermath of demonetization, the YES Bank fiasco, the crisis in Jet Airways and NPLs, among others, The Custodian of Trust is a candid memoir by the former Chairman of India's largest commercial bank. Anecdotal, engaging and evocative, this book is an unputdownable memoir of a former banker.
About the Author
With four decades of service in the State Bank of India (SBI), the country's largest commercial bank, Rajnish Kumar retired as its Chairman in October 2020. Credited with steering SBI through a very difficult period for the bank and the banking industry in India, he played a stellar role in saving YES Bank and led from the front to resolve the problems faced by many high-profile stressed assets.
An MSc in physics, Kumar is a Certified Associate of Indian Institute of Bankers (CAIIB), an avid traveller and is passionate about badminton.
*===================*===================*