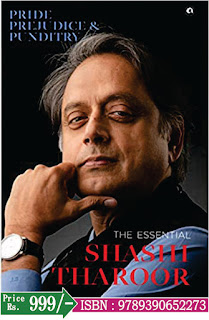 About the Book
Shashi Tharoor is one of India’s greatest living writers. In the course of a career that has lasted more than half a century (his first short story made it into print when he was ten), he has published over five million words—in books, newspapers, magazines, journals, and online media—on a variety of subjects. Pride, Prejudice, and Punditry brings together the very best fiction, non-fiction, and poetry from his published books and journalism—as well as many pieces that have been written specially for this volume.
There are ten sections in the book, each devoted to a particular topic. ‘In the Company of Giants’ looks at some of the most important figures of modern Indian history; ‘Into the Maelstrom of Indian Politics’ contains work on the Indian political scene; ‘Our Unruly World’ covers international relations and diplomacy; ‘The Hindu Way’ examines various aspects of the faith; ‘Musings of a Cricket Tragic’ includes some of his finest writing on the sport; ‘You Cannot Be Serious!’ is a light-hearted take on sundry matters; ‘Fragments of an Autobiography’ has poignant essays about his parents and an evocative look at his Kerala heritage; ‘The Spoken Word’ is a selection of his most famous speeches; ‘The Writerly Life’ comprises ruminations on writing and writers; and ‘Selected Fiction and Poetry’ showcases his masterpieces of fiction and poetry.
This book will give those new to the author’s work a panoramic view of the range and depth of his writing. Long-time fans will find fresh material to delight them as also ageless pieces that continue to enchant. Dazzling, inventive, and exuberant, Pride, Prejudice, and Punditry presents readers with the essential work of a literary genius.
About the Author
Shashi Tharoor is the bestselling author of over twenty books, both fiction and non-fiction, besides being a noted critic and columnist. His books include The Great Indian Novel, India: From Midnight to the Millennium and Beyond, An Era of Darkness: The British Empire in India, The New World Disorder and the Indian Imperative (co-authored with Samir Saran), The Paradoxical Prime Minister: Narendra Modi and His India, The Hindu Way: An Introduction to Hinduism, and, most recently, The Battle of Belonging: On Nationalism, Patriotism, and What It Means to Be Indian.
He was a former Under Secretary-General of the United Nations and a former Minister of State for Human Resource Development and Minister of State for External Affairs in the Government of India. In his third term, he is the longest-serving member of the Lok Sabha from Thiruvananthapuram and chairs Parliament’s Standing Committee on Information Technology. He has won numerous literary awards, including the Sahitya Akademi Award, the Ramnath Goenka Award for Excellence in Books (non-fiction), the Commonwealth Writers’ Prize, and the Crossword Lifetime Achievement Award. He was honoured as New Age Politician of the Year by NDTV in 2010 and won the Pravasi Bharatiya Samman, India’s highest honour for overseas Indians, in 2004.
==========================================================================