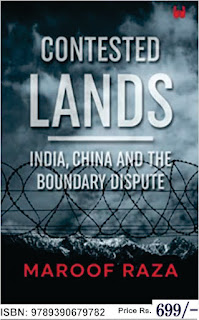 About the Book
The India–China border dispute, going back a century and a half, predates Independence. As complex as the issue is, it pivots on two key questions: Who does Aksai Chin belong to? Will China accept the McMahon Line—which separates it from India's north-eastern front regions—as the international border between the two countries?
Despite several attempts, the two Asian neighbours have not managed to move beyond talks and towards a resolution. Why have bilateral talks not translated into concrete measures? Is there a lack of trust between India and China? How do the individual histories of these two nations contribute to their particular aggressive stances? Are there any other players pulling the strings of this strained equation?
In Contested Lands, Maroof Raza dives deep into the history of this long-standing territorial dispute, going right to the root of the problem. Clear-sighted, measured and rigorously researched, this is a necessary addition to the literature on India–China relations.
About the Author
Maroof Raza, a former Indian Army officer, was educated in India and in the UK. He is now a well-known media commentator on global, military and security issues, and is currently the consulting editor of India’s Times TV Network (for strategic affairs), where he has hosted award-winning shows like Line of Duty and Tales of Valour. Maroof’s areas of interest include the Kashmir issue, Sino-Indian relations and insurgencies. His published works include Kashmir’s Untold Story(co-authored with Iqbal Chand Malhotra), Shourya Gatha: Bharat Ke Veer Senani (co-authored with Lt. Col. Sheodan Singh) and an anthology of essays that he co-edited, Confronting Terrorism. He has also lectured in India and abroad on India’s security challenges, and on what India should do to become a great power.
*****************************************************************