Rebels Against the Raj: Western Fighters for India’s Freedom
by - Ramachandra Guha 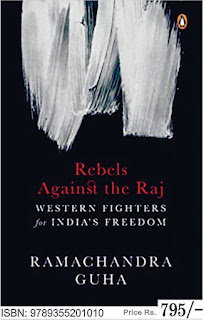 About The Book
Rebels Against the Raj tells the story of seven people who chose to struggle for a country other than their own: foreigners to India who across the late 19th to late 20th century arrived to join the freedom movement fighting for independence from British colonial rule.
Of the seven, four were British, two American, and one Irish. Four men, three women. Before and after being jailed or deported they did remarkable and pioneering work in a variety of fields: journalism, social reform, education, the emancipation of women, environmentalism.
This book tells their stories, each renegade motivated by idealism and genuine sacrifice; each connected to Gandhi, though some as acolytes where others found endless infuriation in his views; each understanding they would likely face prison sentences for their resistance, and likely live and die in India; each one leaving a profound impact on the region in which they worked, their legacies continuing through the institutions they founded and the generations and individuals they inspired.
Through these entwined lives, wonderfully told by one of the world's finest historians, we reach deep insights into relations between India and the West, and India's story as a country searching for its identity and liberty beyond British colonial rule.
About The Author
RAMACHANDRA GUHA was born and raised in the Himalayan foothills. He studied in Delhi and Kolkata, and has lived for many years in Bengaluru. His many books include a pioneering environmental history, The Unquiet Woods; a landmark history of his country, India after Gandhi; and an authoritative biography of Mahatma Gandhi, both volumes of which were chosen by the New York Times as a Notable Book of the Year. Having previously taught at Oslo, Stanford and the London School of Economics, he is currently Distinguished University Professor at Krea University. Guha's awards include the Leopold-Hidy Prize of the American Society of Environmental History, the Howard Milton Award of the British Society for Sports History, and the Fukuoka Prize for contributions to Asian culture. He is the recipient of an honorary doctorate in the humanities from Yale University.
**********************************************************************