Birdwatching: A Novel
by Stephen Alter 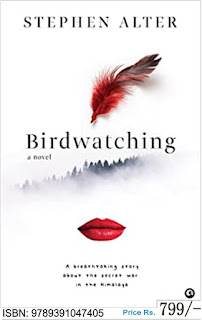 About the Book
When American ornithologist Guy Fletcher stumbles upon a dead body near Chanakyapuri, New Delhi’s diplomatic enclave, he does not realize that his life is about to change drastically. Soon, he is recruited into the CIA and sent straight into the heart of a secret war raging in the Himalaya. Alongside him are his two unlikely partners—the enigmatic Captain Imtiaz Afridi of the Indian Military Intelligence, whom he meets on a hunting trip in Kashmir, and the mysterious but alluring Kesang Sherpa, who saunters into his world in Kalimpong. Their missions and emotions inextricably entwined, the three must learn to trust their own instincts, and one another, to uncover what lies beneath the dazzling Himalayan snow.
Set against the backdrop of the Sino–Indian war of 1962, Birdwatching is a gripping tale of high intrigue and mystery.
About the Author
Stephen Alter is the author of more than twenty books of fiction and non-fiction. Wild Himalaya: A Natural History of the Greatest Mountain Range on Earth, his most recent work of non-fiction, received the 2020 Banff Mountain Book Award in the Mountain Environment and Natural History category. His memoir, Becoming a Mountain: Himalayan Journeys in Search of the Sacred and the Sublime, received the Kekoo Naoroji Award for Himalayan Literature. In the Jungles of the Night: A Novel about Jim Corbett was shortlisted for the DSC South Asian Literature Award.
Alter has taught at the American University in Cairo, Egypt, where he was director of the writing program for seven years. Following this, he was writer-in-residence at MIT for ten years. Among the honours he has received are fellowships from the Guggenheim Foundation, the Fulbright Program, the East West Centre in Hawaii, and the Banff Centre for Mountain Culture. He is also the founding director of the Mussoorie Mountain Festival.
************************************************************