The Rise: Kobe Bryant and the Pursuit of Immortality
By - Mike Sielski 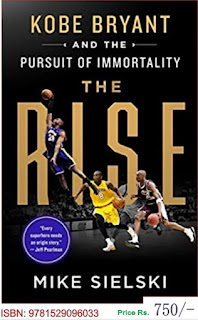 About the Book
Kobe Bryant is a legend – The Rise is a fascinating look at his early life and how he became regarded as one of basketball’s greatest ever players. Kobe Bryant’s death in January 2020 did more than rattle the worlds of sports and celebrity. It took the tragedy of that helicopter crash to reveal the full breadth and depth of Kobe’s influence, and by tracing and telling the oft-forgotten and lesser-known story of his early life, The Rise promises to provide an unparalleled insight into Kobe.In The Rise, readers travel from the cracked concrete basketball courts of Philadelphia in the 1960s and 70s - where Kobe's father, Joe, became a playground, college and professional stand out - to the majesty and isolation of Europe, where Kobe spent his formative years and to the leafy suburbs of Lower Merion, where Kobe's legend was born. The story culminates with his leading Lower Merion to the 1995-96 Pennsylvania state championship - a true underdog run for a team with just one star player, Kobe - and with the 1996 NBA draft, where Kobe's dream of playing pro basketball culminated with his acquisition by the Los Angeles Lakers.With exclusive access to a series of never-before-released interviews during Bryant's senior season and early days in the NBA. Mike Sielski's The Rise reveals insights never seen before. For a quarter-century, these tapes and transcripts preserved Kobe's thoughts, dreams and goals from his teenage years, and they contained insights into him and told stories about him that have never been revealed before.This is beyond a mere basket ball book. This is an exploration of the making of an icon and the effect of his development on those around him - the essence of the man before he truly became a man.
About the Author
Mike Sielski is a columnist for The Philadelphia Inquirer and the author of The Rise: Kobe Bryant and the Pursuit of Immortality and several other books. The Associated Press Sports Editors voted him the country’s top sports columnist in 2015, and his previous book, Fading Echoes: A True Story of Rivalry and Brotherhood from the Football Field to the Fields of Honor, was published in 2009. Sielski lives in Bucks County, Pa., with his wife and two sons.
======================================