India in A New Key: Nehru To Modi: 75 Years Of Freedom And Democracy
by Narain D. Batra 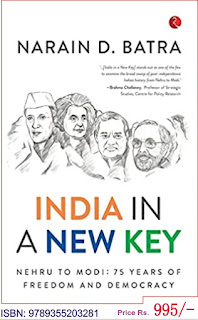 About the Book
On the morning of 15 August 1947, when Jawaharlal Nehru, heir to Mahatma Gandhi, the Buddha and the European Enlightenment, raised the Indian Tricolour on the ramparts of the Red Fort, the seventeenth-century palace of Mughal Emperor Shah Jahan, India was free to make experiments with freedom.
In the seven decades since Independence, the country gradually changed from Nehru’s democratic socialism to Narendra Modi’s democratic entrepreneurial digital India, dealing with its internal contradictions by playing the game of democracy and in the process becoming the sixth-largest global economy. And with Chandrayaan exploring the Moon, a space nation was born.
India overlooks the Himalayas and the Indian Ocean, abridging Southeast Asia with the Middle East. With its immense brainpower and young demographics, India is geopolitically an indispensable nation. Indians play the game of democracy any which way they can: through massive elections; parliamentary debates and no-confidence motions; coalition forming and horse-trading; hartals, bandhs, dharnas, fast-unto-death; and finally, when nothing works, they knock at the doors of the Supreme Court.
India in a New Key attempts to offer an insight into questions like:
- How has India been experimenting with freedom to solve its socio-economic problems?
- Can Modi—like Nehru—create a unified Indian consciousness?
About the Author
Narain D. Batra is professor of communications at Norwich University—a 200-year institution nestled in the Green Mountains of Vermont. His field of academic and professional expertise includes literature, history, journalism, geopolitics, diplomacy, social media, ethics, and most of all, the First Amendment. He is the author of several books including The First Freedoms and America’s Culture of Innovation: The Constitutional Foundations of the Aspirational Society; Digital Freedom: How Much Can You Handle?; A Self-Renewing Society; and, The Hour of Television. For more than a decade, he wrote a weekly column for The Statesman about American politics, culture and technology. He has also written for The Times of India, Business Standard, Mint, The Diplomatist and LA Reveu De L’Inde. He was the editor and publisher of a monthly magazine, People’s Times (Ahmedabad, India). Yoga, meditation and golf keep him going, and going.
============================================================