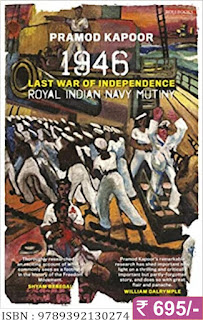 In 1946, 20,000 non-commissioned sailors of the Royal Indian Navy mutinied. They were inspired by the heroism of the Azad Hind Fauj. But their anger was sparked by terrible service conditions, racism, and broken recruitment promises. In less than 48 hours, 20,000 men took over 78 ships and 21 shore establishments and replaced British flags with the entwined flags of the Congress, the Muslim League, and the communists. The British panicked and announced a Cabinet Mission to discuss modalities of transfer of power. By this time, Indian troops had refused to fire on the ratings, and the mutiny sparked revolts in other branches of the armed forces.

The young ratings presented a charter of demands, even as they fought pitched battles against British troops. People thronged the streets in support, and hartals were followed by street fights between civilians and British soldiers resulting in over 400 deaths and 1,500 injured. To quell the rebellion, the British commanded their powerful warship HMS Glasgow to sail rapidly from Trincomalee and ordered low sorties by the Royal Air Force fighter planes. In retaliation, the ratings trained the guns mounted on the captured ships towards the shore, threatening to blow Gateway of India, Yacht Club, and the dockyards.

As violence escalated, telegrams flew between the Viceroy’s office and the British Cabinet. The British realized they could no longer hold India by force. While the communists continued to support the rebellious ratings, the Congress and the Muslim League persuaded them to surrender, promising they would not be victimized. Shamefully, years later, the governments of India and Pakistan refused to honour those promises after Independence. The mutiny caused public disagreements between Gandhiji and Aruna Asaf Ali, and between Sardar Patel and Nehru. Historians say it accelerated the transfer of power. But this seminal event, which inspired songs, art and theatre has been edited out of the popular narratives of the Freedom Movement.
About the Author
Pramod Kapoor, the founder and publisher of Roli Books (established in 1978), has over the course of his illustrious career, conceived and produced award-winning books that have proven to be game-changers in the world of publishing. Be it the hit ‘Then and Now’ series and the seminal Made for Maharajas, or even the internationally acclaimed Gandhi: An Illustrated Biography, which is published in eleven editions in most major languages worldwide.

In 2016, he was conferred with the prestigious Chevalier de la Legion d’Honneur (Knight of the Legion of Honour), the highest civil and military award in France, for his contribution to producing books that have changed the landscape of Indian publishing. He is also a recipient of the prestigious Mahatma Award 2021 (an Aditya Birla Group initiative) for Lifetime Achievement for his contribution to publishing and literature in India.