The Dismantling of India
by - T.J.S. George
About the Book 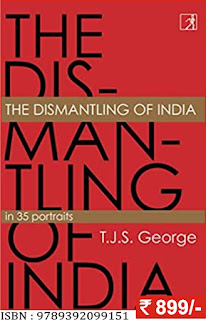 In October 1947, two months after Independence, TJS George arrived in Bombay. He was nineteen years old, with a degree in English Literature. He sent out job applications––to the Air Force and to the city's English-language newspapers. Only one organization cared to reply, The Free Press Journal. The editor was known to hire anyone who asked for a job, but most new hires were sacked in a fortnight. George was put on the news desk as a sub-editor and eventually became an assistant editor. In Patna, as editor of The Searchlight, he was arrested by the chief minister for sedition. He spent three weeks in Hazaribagh Central Jail. In Hong Kong, he worked for the Far Eastern Economic Review as regional editor; in New York he was a writer for the United Nations population division; and, back in Hong Kong, in 1975, he founded Asiaweek. Six years later, he returned to India and settled in Bangalore. He began a column for Indian Express that ran without a break for twenty-five years, until 2022. His seventy-five years of journalism, concurrent with India's development as an independent nation, make for a unique understanding of events and personalities. Acclaimed for his widely historical, pan-Asian vision, George brings this far-flung experience to a compulsively readable new book, The Dismantling of India. It is the story of India told in 35 concise biographies, beginning with Jamsetji Tata and ending with Narendra Modi.
About the Author
TJS George was born in 1928 in Kerala. He was the first editor of independent India to be charged with sedition and imprisoned by a chief minister. He worked as a journalist and editor across India and Southeast Asia before co-founding Asiaweek in Hong Kong in 1975. After returning to India he began working with the Indian Express as an editor and columnist. He is the author of twenty books, including biographies of Krishna Menon, Lee Kuan Yew, Nargis and M. S. Subbalakshmi. His ‘Point of View’ has appeared every Sunday in the New Indian Express for twenty-three years. He is a recipient of the 2011 Padma Bhushan and numerous other awards. He lives in Bangalore.
======================================================